True British metal veterans Blitzkrieg are still at it. Brian Ross still has his voice and they have another solid NWOBHM-style album for you.

One thing that hit me when I saw Blitzkrieg perform live in Japan in 2016 was that the band’s original frontman still had his voice intact. Unlike many of his contemporaries, Brian Ross has kept his pipes and stamina. That makes this so much better than many other veteran metal bands who either have an original singer who no longer can hit the notes or have have brought in a younger (and often out of place) replacement.

Having formed in 1980, Newcastle-based Blitzkrieg was part of the original NWOBHM movement in the 80s. Musically the band is still there. “Angels or Demons” is one of the standout tracks on the album. “Falling Into Darkness” is another immediate favourite. The vampire song “Forever is a Long Time” is a great tongue-in-cheek look at eternity and immortality. “All Hell is Breaking Loose” is a Satan versus God revenge story with a fine guitar solo to top it off. “Wide Legged and Headless” is a fast and great guitar song.

Lyric-wise we get a lot of angels, demons, darkness, fire, hell, loud, proud and so on. All as expected and according to plan. Brian Ross likes to label Blitzkrieg as “true British metal” and, yes, this is honest, to the point British metal without too much fuss. It’s straightforward metal and it works well. On “Without You” Brian hands over the microphone to his son Allan Ross who is also the band’s guitarist. This song is different from the rest, not only because of a different voice but also in style. It doesn’t sound much like Blitzkrieg. Father and son Ross are joined in the current line-up of the band by long-time member Ken Johnson on guitar as well as two newer members, Matt Graham on drums and Huw Holding on bass. Huw also plays in another veteran metal band from the UK, Avenger. That is the same Avenger that Brian Ross co-founded in the early 80s.

Get yourself a helping of true British metal with Brian Ross and his northern lads.

Blitzkrieg’s album “Judge Not” will be released on 27th April via Mighty Music and distributed in Japan via Spiritual Beast. 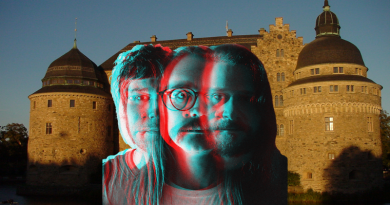