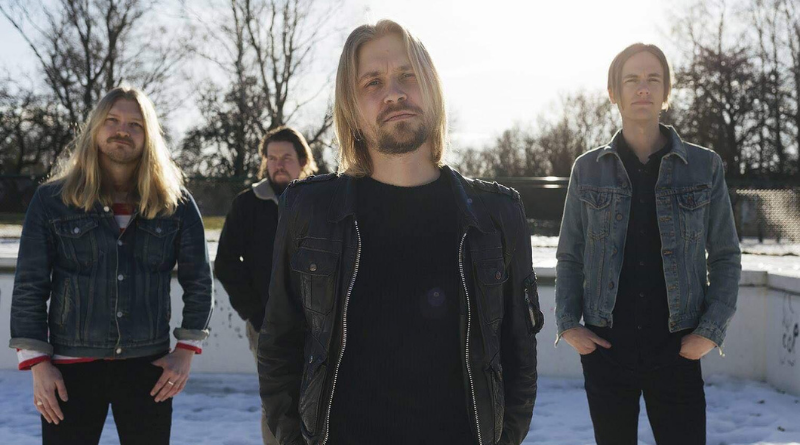 What a treat! Erik Lazaroff & Hökarna is a great new Swedish rock band with a recently released debut album. A terrific sound which combines Pugh Rogefeldt and Roky Erickson and blends it all with scoops of Blue Öyster Cult and November.

Erik Lazaroff & Hökarna is a new Swedish band playing rock with Swedish lyrics and a sound firmly stuck in the 70s. There are echoes here of Marc Bolan and T-Rex, Uriah Heep and similar British rock acts and some blues influences. Lazaroff himself mentions Blue Öyster Cult and Roky Erickson among his inspirations. But Lazaroff’s music primarily carries on a Swedish tradition of rock music from the 70s – think the rockier parts of Pugh Rogefeldt’s back catalogue and hints of Swedish bands from that era such as November and Solid Ground. On songs such as “Under hökens vingar” we get that fantastic jam-friendly kind of vibe. Music played by musicians who are not in a hurry to finish a song but rather have some fun with their instruments. They are here to entertain and they are good at it. There are plenty of fantastic songs here, such as “Kärleksbensin”, “Black Mamba”, “Häxkonst”, “När du fryser” and “Pansartåg”. “Innanför mitt skinn” is my personal highlight on the album. It is very catchy, has great guitars and manages to have a retro feeling while still being relevant and without sounding dated. Mainman Erik Lazaroff is the band’s vocalist, guitarist and songwriter. His band, Hökarna (Swedish for The Hawks), is a very competent bunch of musicians. Together they have created a debut album that sounds terrific. Old but new. Simple on the surface, yet complicated underneath. Effortless-sounding but no doubt an album which has demanded a lot of effort and dedication.

Erik Lazaroff & Hökarna’s debut album “Under hökens vingar” is available through Lightning Records and is distributed by Sound Pollution Distribution.