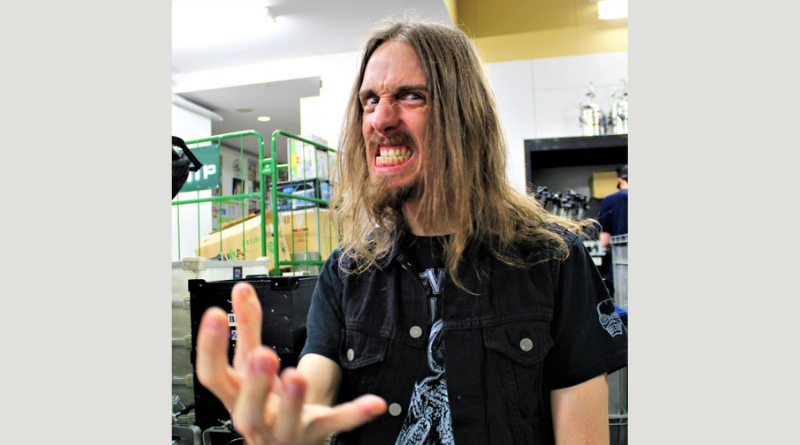 Dirk Verbeuren talks to Roppongi Rocks about the new Megadeth album “The Sick, The Dying… And The Dead!” and reveals that he will also release a new Bent Sea album.

Following a busy summer of touring in North America and Europe and a new North American tour only days away, thrash metal pioneers Megadeth will shortly release their 16th studio album “The Sick, The Dying… And The Dead!”. Roppongi Rocks’ Stefan Nilsson checks in with Megadeth drummer Dirk Verbeuren to discuss the new album. Dirk, previously the drummer for Soilwork, joined Megadeth in 2016. In the current line-up of Megadeth, he plays with Dave Mustaine (vocals and guitar), Kiko Loureiro (guitar) and James LoMenzo (bass).

You’ve been in the band for about six years now. How does it feel to have a Megadeth album that you play on finally? “It feels great! Six years is a long wait, much longer than we had hoped. But it makes sense when you look at everything that happened during that time. We toured in support of ‘Dystopia’ for three years. Then, not long after we started writing new songs together, Dave faced throat cancer. He underwent chemotherapy and radiation and beat the cancer. A few months later, just as we came home from a successful European tour, the pandemic happened and shut everything down. Despite everything, we managed to do the first leg of the ‘Metal Tour of the Year’ with Lamb of God in 2021, but the album release had to be pushed back until now. I’m just happy ‘The Sick, The Dying… And The Dead!’ is finally ready for people to sink their teeth into. On a personal level, I’m grateful I got to spend those six years getting to know Dave, Kiko and James. We work together so well that it really feels like a band of brothers. The next record shouldn’t take another six years – as a matter of fact, we’ve already started working on some new ideas.”

Listening to the new album, what really stands out for me are two things – 1) The musical boundaries have been pushed out with the music wandering off in some unexpected but great directions, and 2) Your drumming. I don’t think that drums have played such a vital part in Megadeth’s music since Gar Samuelson’s days in the band. The band has always had great drummers, but here the drums are more varied and more prominent than we have heard in a long while. Do you feel that you have made your own mark on the album? “Thank you, Stefan, that’s great to hear! I do feel that I was able to express myself on the new songs. Dave welcomed Kiko’s and my contributions as writers and performers. He left a lot of freedom for us to experiment during the writing and in the studio, and so we worked together to explore new ground. It was hard work, but also a lot of fun. I like to bring my ideas to the table, of course, but it’s equally important for me that I give Megadeth fans, of which I grew up being one myself, everything they’ve come to love about the band. To me, that means not just playing to the best of my abilities, but also understanding what constitutes a good Megadeth song, as well as how previous drummers like Gar Samuelson and Nick Menza‘s approach contributes to each song. In that regard, the three years spent touring for ‘Dystopia’ and playing those classics taught me a lot. Day after day, I absorbed what the Megadeth sound is about and where the drums fit into that sound. Dave really helped me by inviting me to study every nuance of every drum part. I’ve always loved Gar’s and Nick’s styles and it’s great to be able to follow in their footsteps.”

Which of the new songs can we expect to see in the live set as you start touring again? “For starters, I’d say the first two singles, ‘We’ll Be Back’ and ‘Night Stalkers’. We’re rehearsing them now. During the ‘Dystopia’ tour, we were playing seven or eight new songs at one point, so as this next world tour barrels along, there should be quite a few more new songs in the set, on top of the two I mentioned. Wait and see.”

After the recording of the album, bassist James LoMenzo rejoined the band. In recent months you’ve done a couple of tours with him in North America and Europe. How have you two found each other musically? “I think I can speak for both of us and say that we found each other… to be quite likeable chaps! In all seriousness, James is a seasoned veteran who knows exactly how to reinforce our shows with his energetic stage presence, impeccable backing vocals and overall professionalism. He’s a team player. It’s a natural fit as far as our rhythm section goes. James sticks to the drums like superglue packed with organic swagger additives. Playing together and hanging out with him has been and continues to be a blast.”

In addition to your busy schedule with Megadeth, I understand that there is a new Bent Sea album in the making. Tell us about it! “You’re right, I did carve out time to write some grind! The foundation of the LP dates back to 2014 when I recorded a bunch of drums at my good friend Daniel Bergstrand‘s studio in Sweden. I had a long layover that evening and decided to spend it blasting. Why not, right? It took a while to turn those drum improvisations into songs, but that’s what Bent Sea was built on: spontaneous creation. I’m really proud of the result. It’s a big step up from the earlier stuff. Sven de Caluwé and Shane Embury sang and played their hearts out, and there are a few special guests on the album too. It’s called ‘The Dormant Ruin’. The title and many of the lyrics deal with the havoc wreaked by our species on Mother Earth. These days it’s hard for me not to feel concerned about the state of our world… the only one we have. Right now, all my focus is on Megadeth. We have a lot on our collective plates – it’s a very exciting time. When it comes to Bent Sea, I expect for ‘The Dormant Ruin’ to come out in early 2023 at the latest. Fans of fast, intense, heavy music should definitely check it out!”

Megadeth’s new album “The Sick, The Dying… And The Dead!” will be released on 2nd September via Universal Music.