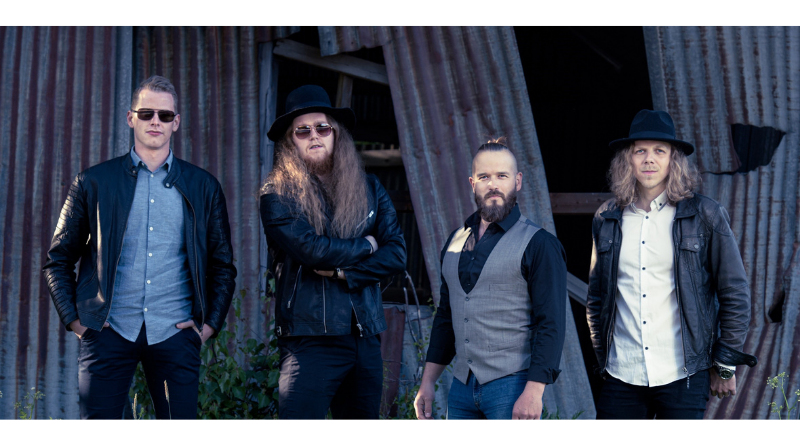 Swedish rockers Electric Haze arrives on the scene with a promising debut album.

Electric Haze was formed in northern Sweden in 2014 and released a self-titled EP in 2016. “Get In Line” is the band’s debut full-length studio album. Overall this is a great rock album. This band has some fine songwriting skills and some serious musicianship as well. The tracks “Succuba” and “WOAH!” kick things off in a great way. For the most part, this album is groovy, feelgood blues-based hard rock with haze rock touches. It is a good combination of classic hard rock and modern music. “Get In Line” is proper 70s hard rock, part AC/DC, part Led Zeppelin, but mostly Electric Haze. The album is great but it is not entirely even. Personally I find that a song like “All I Ask For” sounds like it is not quite finished. It is a foundation of a great song, an idea. To me it sounds like a first demo of a great song in the making. A sharper execution would make it killer. “Cavern of Pain” is a good emotional ballad while the very cool track “Lest We Forget” sounds like 1980s American hair metal mixed with Accept influences. “Too Close to the Truth” sounds like it could go from being very good to become freaking fabulous with a punchier production. “Clenched Fist” is the album’s highlight for me with its hazy blues hard-rock groove. The album closes with the power ballad “Cryin’”. This band – Anton Ekström (vocals), Johan Andersson (drums), Andre Ekström (bass) and Tommy Töyrä (guitar) – has a lot of potential. Keep an eye on these Swedish lads. This is the start, there are more and even better things to come from this band.

Electric Haze’s debut album “Get in Line” is out now via Idle North Records.