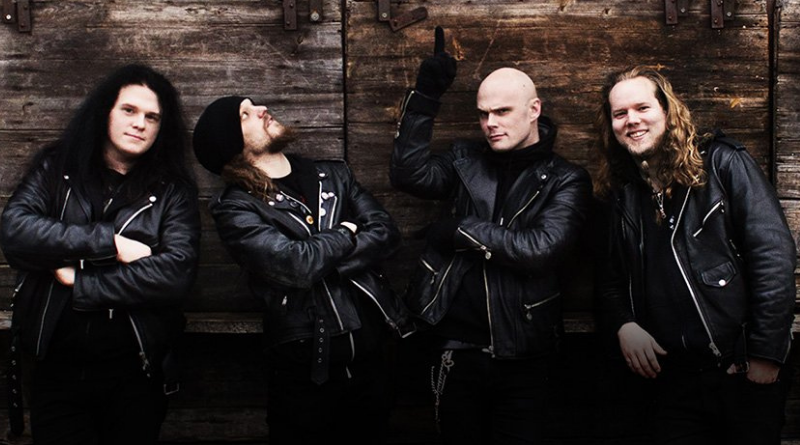 Formed in Stockholm in 2007, Swedish band Sterbhaus calls its music “metal deluxe – Swedish timeless blackened thrash/death”. Fair enough. The deluxe part of the description, I guess, is part of the band’s self-deprecating dark humour. This style of heavy metal is somewhat hard to define. It is heavy, gritty and raw. Uncompromising but less stenchy and sinister than some of the purer black or death metal bands. This is different in an interesting way. It comes across as a bunch of metalheads just wanting to play metal and not worrying about fitting into a subgenre or taking themselves too seriously. “Necrostabbing at Göta Källare – Live in Stockholm” is a recording of the album release show for “New Level of Malevolence” which took place on 17th October 2015. The Sterbhaus line-up that performed that show consisted of Marcus Hammarström (Elvira Madigan, Shining) on vocals and bass, Jimmy Ahovalli (Skitarg) on lead guitar, Simon Olovsson (Avslut) on guitar and Erik Röjås (Ondskapt, Netherbird) on drums. Seven of the live album’s nine tracks are from the “New Level of Malevolence” album. In addition, we get treated to the songs “Absolutely Do Not Die!” and “Ministry”, both from the 2012 album “Angels for Breakfast…and God for Lunch”. “Grudgeholder + Hatemonger” is a great song that is a tad bit more straightforward thrash metal than many of the other songs. It is also the best song on this live album. As is often the case with this band, they can’t just play this song in a straightforward manner. In the final part of the song, we get an amusing section with nonsense lyrics sung in Swedish. It’s all part of Sterbhaus being Sterbhaus. The album’s closing number, “Ministry”, is an obvious highlight with its ferociousness and speed. Similar to the album’s opening number, “Necrostabbing the Corpsefinder”, this song too is best described as a violent, pissed off and drooling dog attacking the listener. It is a perfect way to close this show and a great, unpolished live album.

Sterbhaus’ live album “Necrostabbing at Göta Källare – Live in Stockholm” will be released via Black Lodge Records on 9th July.