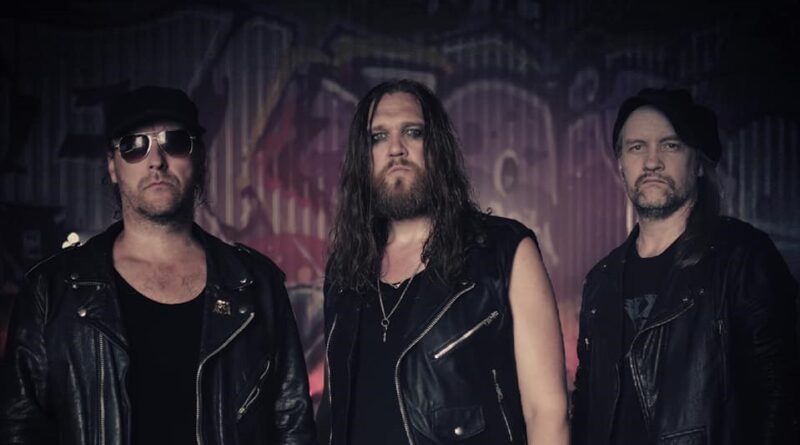 If European melodic heavy metal of the 1980s is your thing, then Sweden’s Knights of the Realm is for you. Hard-hitting and very melodic, it is the best of two worlds nicely packaged as a Swedish heavy metal band overflowing with 1980s-style heavy metal. While Knights of the Realm is a new band, there is some serious pedigree here in the form of drummer Lars Sköld of Tiamat fame and guitarist Magnus Henriksson from Eclipse. They are joined in this forceful heavy metal trio by vocalist Marcus Von Boisman whose voice clearly is meant to sing heavy metal. Fantastic song titles such as “Chains of Metal”, “Blood on Steel”, “When Metal Meets the Beast” and “Metal Attack” hint at what this is all about. On the track “Heavy Metal”, the band pays respect to its musical heroes and at the same time makes a bit of fun of a genre that these men clearly love. It’s excellent self-deprecating humour delivered in a fine form of heavy metal. “Fields of Fire” is more of a straight-faced track and it is one of my favourites on the album. The album never gets boring. There is enough musical variety here to keep the listener glued to the speakers. The “Knights of the Realm” album contains excellent and entertaining songs which have a sound foundation in classic heavy metal. People who take themselves too seriously may not understand this kind of tongue-in-cheek approach to heavy metal. But for the rest of us, this is gloriously fun. The song styles, the lyrics, the guitar sounds and everything else about Knights of the Realm are great reminders of why we all love 1980s metal. This is a great tribute to the past but delivered here and now. The band name probably comes from the lyrics to Saxon’s classic song “Crusader” which in itself makes this band worth a listen. This kind of music is still relevant and it clearly has a future. This is my music and these are my people. Now let’s take on the world and give it proper heavy metal!

Knights of the Realm’s self-titled debut album will be released on 12th November via Playground Music.