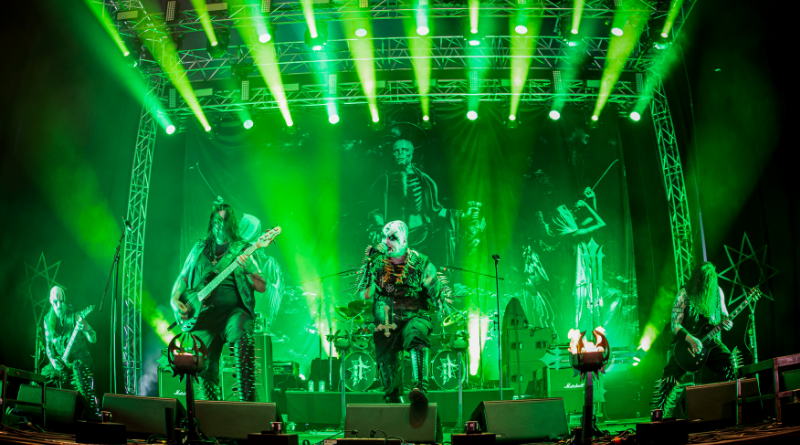 Norwegian black metal is a tough subgenre to be in, not least if you’re from Norway, home to the infamous and chaotic second wave of black metal of the early 1990s. But that doesn’t scare Nordjevel. The Nordjevel members just walk onto the stage and deliver like there’s no tomorrow. While Nordjevel is a relatively new band, formed in 2015, the members (Doedsadmiral – vocals, Destructhor – guitar, Dominator – drums, Valla – guitar and DzeptiCunt – bass) have pedigree from playing with bands such as Morbid Angel, Cadaver, 1349, Myrkskog, Ragnarok, Dark Funeral, Netherbird and many more. It is a seasoned group of gentlemen of darkness with plenty of experience of extreme metal gigs and tours. It shows in Nordjevel’s exquisite and intense music. It is dark, cold, damp, stenchy, evil, sinister and wonderfully splendid. Evil will prevail in Norway. What we get on “Fenriir” is three magnificent new studio tracks plus a death metal cover and a live recording of “Det Ror og Ror”, recorded at the Brutal Assault festival in the Czech Republic in 2019. The five tracks are a nice mix of tracks in Norwegian and English. The ultra-fast “Gnawing the Bones” is my favourite track. While this is only a five-track EP, it is a great demonstration of the different sides to this band. They pretty much stay within the loosely defined parameters of black metal, although we do get a terrific over-the-top cover of American death metal band Possessed’s “Fallen Angel”. But within the black metal subgenre, Nordjevel shows us quite a bit of variety, including influences from the members’ previous bands. On the title track “Fenriir” we get some Nordic blackened folk metal touches while “Rovdyr” is more pure black metal. Most importantly, the band shows us that they stand shoulder to shoulder with Norway’s best black metal bands. A new full-length album is in the works and will hopefully be released before the end of the year.