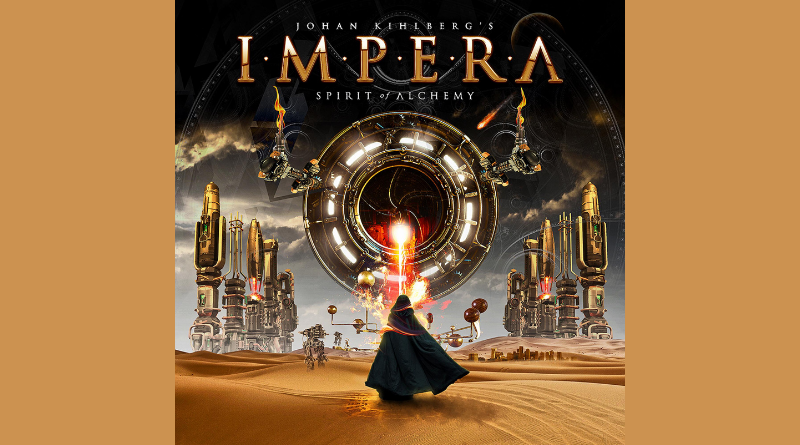 Johan Kihlberg’s Impera was founded by drummer Johan Kihlberg in Stockholm, Sweden in 2011. “Spirit of Alchemy” is the band’s sixth album. Johan – who has done session work in backing bands for Vinnie Vincent, Bruce Kulick, John Corabi, Graham Bonnet and Brian Robertson – has gathered an impressive line-up of musicians to play with him on the album: Europe bassist John Levén, drummer Snowy Shaw (King Diamond, Mercyful Fate, Memento Mori, Therion, Dimmu Borgir, Dream Evil), vocalist Jonny Lindkvist (Nocturnal Rites) and guitarist Lars Chriss (Lion’s Share). There are also guest appearances by Kay Backlund (Lion’s Share) on keyboards, Mats Vassfjord (220 Volt) on bass and Pontus Egberg (King Diamond, Treat, Lion’s Share, The Poodles) on bass. Musically, this album lives somewhere in the valleys of 1980s Swedish melodic hard rock and power metal. It’s riff-happy but always melodic. “Lost Your Life to Rock’n’Roll” has echoes of Europe while “All About You” has some 220 Volt vibes. The song quality is very strong throughout the album and, obviously, with a band line-up like this, Impera delivers in the studio. Personal favourites on the album, in addition to the previously mentioned tracks, are “Read It and Weep”, “When Souls Collide” and “In Heaven”. All of them are melodic hard rock songs full of energy and heavy riffs. Johan Kihlberg has a passion for atmospheric film scores and we get treated to some of that on the instrumental track “Battle” and also on a “The Empire Strikes Back” medley which features as a bonus track on the Japanese edition of the album. Impera was scheduled as opening act for KISS in Sweden before the “End of the Road” tour came to a halt due to the global pandemic. Hopefully, Impera will get a second chance at opening for KISS once arena gigs will be possible again. This music needs to be performed live. In the meantime we will listen to this fab album of Swedish melodic hard rock.

Johan Kihlberg’s Impera “Spirit of Alchemy” will be released on 9th April via Rubicon Music in Japan and via Metalville internationally.