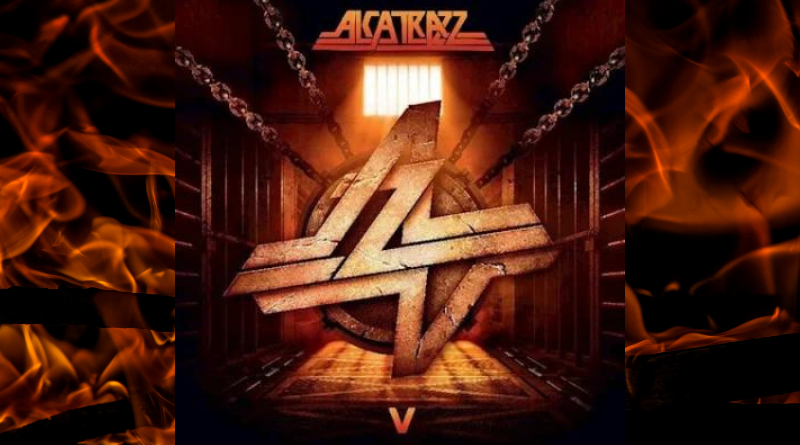 “V” is Alcatrazz’s fifth studio album since the band was founded in 1983. Between every album, Alcatrazz has evolved. It has always moved on musically and has had at least one significant member change with every new album. And every time they have continued to deliver. The new album is no exception to that tradition. Alcatrazz co-founders Gary Shea (bass) and Jimmy Waldo (keyboards) have played on all albums, but throughout the band’s history there have been several significant line-up changes. After the first album, “No Parole from Rock’n’Roll”, lead guitarist Yngwie Malmsteen was replaced by Steve Vai, who played on album number two, “Disturbing the Peace”. When it was time for the third album, “Dangerous Games”, Vai had been replaced by Danny Johnson. On album number four, “Born Innocent”, Joe Stump was the lead guitarist. He replaced Conrado Pesinato who was the lead guitarist for the live release “Parole Denied – Tokyo 2017”. Now, for the first time in Alcatrazz history, Alcatrazz is releasing a new album without changing its lead guitarist. Joe Stump is still in the band. This time, it is original vocalist Graham Bonnet that is absent and has been replaced by Doogie White. Doogie was a surprise addition to the band for me, but – oh my! – he is the perfect choice for Alcatrazz. The Scotsman can sing like it’s nobody’s business. He is a seasoned rock vocalist that has fronted Ritchie Blackmore’s Rainbow, Yngwie Malmsteen’s Rising Force, Michael Schenker’s Temple of Rock, Praying Mantis, Tank and much more. Not many people could take on the gig of being the new frontman in Alcatrazz. Doogie can and he does. Musically, on this new album, Alcatrazz has taken a step in a harder and heavier direction. It sounds fantastic. Joe Stump is a brilliant metal guitarist of the neoclassical kind (with Joe in the band no one is missing Yngwie). Plenty of guitar wankery, yes, but never over-the-top, never too much, never overshadowing the songs. Joe’s guitar wizardry enhances the songs. Drummer Mark Benquechea, who joined Alcatrazz in 2017 in time for the Japan reunion shows, is a powerhouse that functions well with Shea, Waldo, Stump and White. The new album also features guest appearances from Saxon’s drummer Nigel Glockler, Tank’s bassist Cliff Evans and Riot’s bassist Donnie Van Stavern. The album is rock solid but standout tracks for me include “Return to Nevermore”, “Midnight Won’t Last Forever”, “House of Lies” and “Grace of God”. Most of the songs are hard and heavy, but Alcatrazz has retained its catchiness. A great melody has always been a key ingredient for Alcatrazz. I really dig this fresh new take on Alcatrazz. It’s not tired, it’s relevant, it’s here and now while still paying respect to the band’s history. Bringing in Doogie was a very smart move. Welcome back, Alcatrazz!

Alcatrazz’s new album “V” will be released on 15th October via Silver Lining Music. Alcatrazz will tour the UK in November and December together with Girlschool.