Swedish heavy metal band HammerFall is back with “Dominion”, its eleventh studio album. This band is still all about good-fun and bombastic shout-along melodic heavy metal.

“Dominion” is HammerFall’s eleventh studio album since the band was formed in 1993 in Gothenburg, Sweden. Guitarist Oscar Dronjak is the only original member left in the band. Early line-ups of the band featured members from In Flames and Dark Tranquillity. Frontman Joacim Cans has been in the band for 23 years now and has sung on all of its albums. The current line-up also features Fredrik Larsson (Evergrey) on bass, Pontus Norgren (Talisman, The Poodles, Zan Clan, Great King Rat, Jeff Scott Soto) on guitar and David Wallin (Pain) on drums.

After all these years, HammerFall has a well-established signature sound which is melodic heavy metal with plenty of power metal and NWOBHM influences. HammerFall plays melodic, high-energy metal. At times it’s bombastic and often humorous. But this band is for real and they are on a heavy metal mission. The new “Dominion” album is more of the same music that we have heard before. They are not reinventing themselves here, but no one wants them to do that anyway. If you like your metal based on the classic 80s metal sound and with plenty of shout-along anthems and plenty of opportunities to play air guitar, this is for you. The track “We Make Sweden Rock” is both fun and terrific at the same time. This is good-fun metal with plenty of echoes of the 1980s but without sounding retro. This is a band that knows what its mission is and the band members are very good at what they do. “Second to One” is a great power ballad complete with emotional vocals, piano and a fine guitar solo. But it is with heavy metal songs such as “Scars of a Generation” and “Dead by Dawn” – with terrific metal guitar riffing – that HammerFall shows us its best side in my opinion. Song titles such as “Battleworn”, “Bloodline”, “Chain of Command”, “Dominion”, “One Against the World” and “Never Forgive, Never Forget” are part of a long and proud tradition of heavy metal lyrics. We Make Sweden Rock indeed. Japan too.

HammerFall’s new album “Dominion” will be released on 16th August in Japan via Ward Records and internationally via Napalm Records. On 15th September, they will perform in Tokyo. 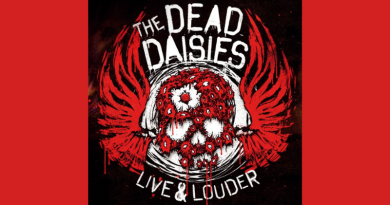