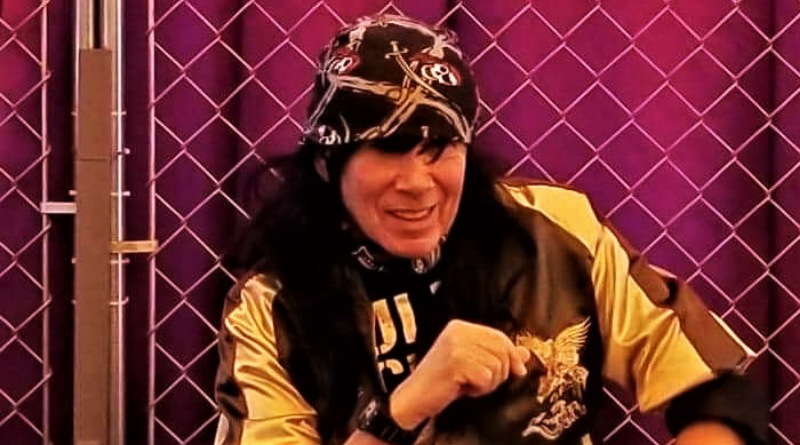 Englishman Dave du’Fort, also known as Hermien JD, initially made a name for himself as a drummer with artists such as Ian Hunter, E.F. Band, Angel Witch, Tytan and Mike Oldfield. Dave, who is the older brother of Girlschool drummer Denise Dufort, is now based in Tokyo where he is mainly focusing on creating cinematic production horror music and creepy and sinister soundscapes. Roppongi Rocks’ Stefan Nilsson checked in with Dave to find out what five albums shook him to the core.

“The first time I ever listened to this album it practically blew my socks off. Unfortunately, due to the volume I was listening at, my neighbours on both sides nearly had their socks blown off too. Haha! One contacted the police to investigate ‘an apparent musical disturbance’. It’s a pity my neighbours had such poor taste in music. Me, on the other hand, had always been a big fan of Led Zeppelin as a band, collectively and as individual players. Somehow the tracks on ‘The Song Remains the Same’ seemed to capture the rawness and power of Zep live, but with the added slickness of a studio production. Plus, this album really showcases John Bonham’s unique style and power. In my opinion, Bonham was not only one of the best, most powerful drummers in rock, he was one of the first drummers to be at the forefront musically as an integral contributor to the overall sound of his band. Bonham, along with The Who drummer Keith Moon, paved the way for drummers by turning themselves into actual contributing band members. To this day, Bonham’s drumming is a major influence and inspiration to many drummers, and drum teachers new and established. With a unique style even having rudiments named after him, i.e. The Bonham Triplet, John Henry ‘Bonzo’ Bonham became one of my biggest influences, especially after repeated listening to this album.”

“What is there to say about this and Rainbow in general that hasn’t already been said? Although many would disagree now, back in 1981, ‘Rainbow Rising’ was voted for, and categorised by British rock magazine Kerrang as the greatest heavy metal album of all time. An outstanding combination of great tracks from the amazing line-up that included one of metal’s greatest vocalists, Ronnie James Dio, along with Ritchie Blackmore’s incredible guitar work, Cozy Powell’s thundering drums, not forgetting Tony Carey’s inventive keyboards and Jimmy Bain’s solid bass. With tracks including ‘Tarot Woman’, ‘Run with the Wolf’ and ‘Stargazer’, this album totally blew me away, and still does.”

“I heard this double album in its entirety quite some years after its release. It immediately grabbed me. An amazing piece of work by an amazing power trio of musicians led by one of the most unique and inventive guitar players in rock, Jimi Hendrix. This guy was not frightened to take chances with music styles, experiment, fuse and combine to produce something unique and special, as can be heard throughout ‘Electric Ladyland’. On a first listening, the tracks seem to have a strange combination of looseness, tightness and an almost ethereal feel at times, but that was the whole purpose of The Jimi Hendrix Experience. Despite its massive success, this album marked the last time Jimi Hendrix, bassist Noel Redding and drummer Mitch Mitchell played together. This was the end of The Jimi Hendrix Experience. Sadly, Hendrix died in 1970, two years after this album’s release.”

“This was the first album from AC/DC after the death of vocalist Bon Scott. The black album cover, along with the title was actually a tribute to Bon Scott. Followers and fans of the band, including myself, were very unsure as to what to expect especially from Bon Scott’s replacement, Brian Johnson. With an outstanding collection of tracks, including a great opener in ‘Hells Bells’ and the slow but pounding title track ‘Back in Black’, the introduction to their new lead singer was immediately accepted, at least by most. Bon Scott was a tough act to follow, and Johnson had some big shoes to step into, but he kind of took the bull by the horns. Without trying to be Bon Scott Mark 2, Brian Johnson gave AC/DC his best shot vocally and came through with flying colours. The fact that although Scott will always be missed and is to this day highly respected for his work with AC/DC, Johnson, brought his own vocal style and attitude into the band. Since the tragedy of Bon Scott’s sudden death, and the introduction of a totally different style in Johnson’s vocals, AC/DC have continued to go from strength to strength.”

“Sweet were in my opinion, one of the best commercial rock bands of the so-called glam rock days. Although they had a string of chart hits, especially in the UK, it was pretty obvious that there was quite a bit more to them than their image and music portrayed. And then ‘Desolation Boulevard’ was released. This was the real Sweet showing their true hard rock roots. Brian Connolly’s great and very underrated vocals, Steve Priest’s driving bass and often quirky over the top vocals, Andy Scott’s strong rhythm and lead guitar plus thundering power drums from Mick Tucker. Most of the tracks on ‘Desolation Boulevard’ had a much more aggressive feel and were much heavier than their hit singles. Not sure how true this is, but apparently Mötley Crüe bass player Nikki Sixx was totally into Sweet and supposedly used Sweet as a strong influence in the early days of Crüe. As another point of interest, Sweet’s original vocalist was Deep Purple’s Ian Gillan, proving that Sweet weren’t quite the poppy little band they were initially promoted as.”