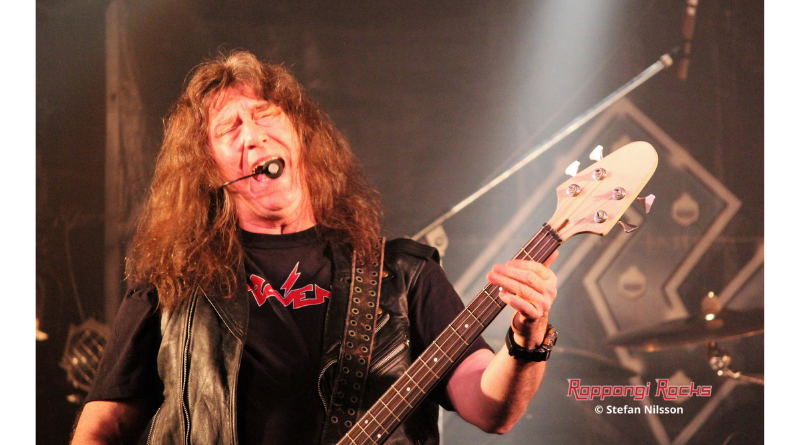 Raven vocalist and bassist John Gallagher founded the band together with his brother Mark Gallagher in Newcastle, England in 1974. 47 years later the band is still going strong. The band’s latest album, “Metal City”, was released in 2020. Roppongi Rocks’ Stefan Nilsson checked in with John to find out about the five albums that make him rock until he drops.

“The first album I ever bought. Still mind blowing! The sheer power of this band is a marvel to behold. Jimmy Lea’s bass playing is just amazing and Noddy Holder has a voice that could level buildings. Combined with them being the first band me and my brother saw live, It was a case of ‘I wanna do THAT’.”

“I heard this long before the studio albums, which are great, but this is on another level. Even as a kid I understood they were improvising, listening to each other and changing up their parts as if they were throwing a ball around to each other! I mean, compare the studio ‘Highway Star’ to this one. The live one is just brutal! Every one of them at the top of their game. The real deal.”

“One of the UK music papers had a three-song flexi disc giveaway. The band was Montrose and it blew our bleeding heads off! In exactly the same way the Van Halen debut would five years later, with the same producer and engineer no less. Pure freakin’ energy. Every track a gem. We used to play ‘Space Station #5’ and ‘Make It Last’ for years back in the clubs. It’s in our DNA!”

“A unique band got ever more so on this album. Only three tracks but damn, It’s a masterpiece. Chris Squire’s playing and note choices on this defy belief and convention. As do the performances of Steve Howe, Alan White, Patrick Moraz and Jon Anderson. For such a technical band on the surface, it’s pure emotion all the way through and an album I can never tire of.”

“I’d heard a few songs of hers in passing and the comments of being a Kate Bush rip-off, totally wrong, but finally saw her performing ‘Hey Jupiter’ on ‘The Tonight Show’ and got it. Pure artistry. Pure raw emotion. Unstoppable bulletproof piano playing and that voice. And to think some of the songs like ‘Marianne’ were improvised right there on the spot, impossibly amazing. The whole thing is just daring and odd and wonderful rolled into one.”