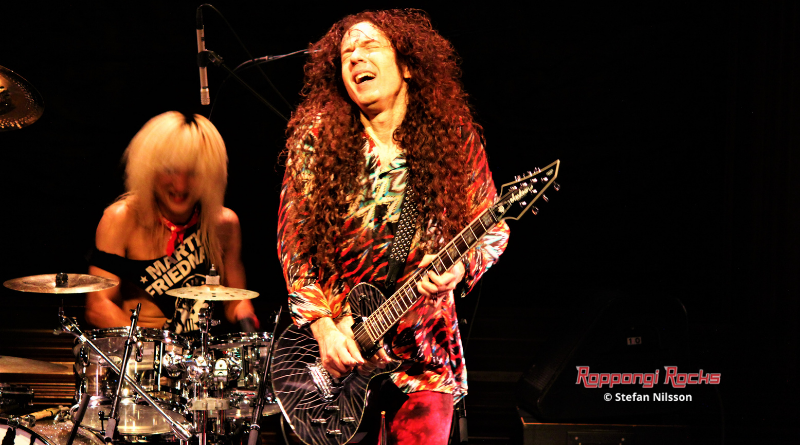 The Cotton Club is a terrific live music venue in central Tokyo. It is typically home to jazz gigs performed to a seated audience that combine food and drinks with live music. On a recent November Saturday, guitarist Marty Friedman returned to the Cotton Club (where he previously performed in April) to play two instrumental sets backed up by a fab trio of musicians. The two sets were billed as “Marty Friedman – Rock Supreme in Tokyo” and, indeed, we did get supreme rock by Marty. I have seen Marty perform in Japan so many times over the years that I have lost count. He puts on different kinds of shows with different styles, songs and musicians, but they always have one thing in common: they are all bloody terrific. No matter who is backing him up, what songs are played, which venue he performs at, what the musical theme is, what kind of audience it is and so on, Marty always delivers. Marty is not only a world-class guitarist. He is also a world-class performer. He is an entertainer who at times reminds me of Frank Sinatra and Dean Martin. No, they didn’t play the electric guitar, they were singers. But they were great performers with great songs. Throughout their long careers, they were especially good at interacting with the audience members between songs, just like Marty is now. Marty carries on that performance tradition but with his beloved guitars instead of vocals. On this Saturday in Tokyo’s business district, Marty performed two fully instrumental sets. They were pretty close to flawless. His backing trio was on fire. Chargeeeeee is Marty’s preferred, and most frequently used, drummer for his live gigs both in Japan and abroad. He is an excellent drummer with an over-the-top and larger-than-life stage presence. He performs barefoot and gives Marty a run for his money when it comes to on-stage banter. Rock-steady bassist Toshiki Oomomo played on two of Marty’s albums, “Inferno” and “B: The Beginning THE IMAGE ALBUM”, while guitarist Naoki Morioka has toured with Marty in India, Australia and all over Asia. Being “the other guitarist” in Marty Friedman’s solo band can’t be an easy gig. But Naoki pulled it off and even squeezed in some exquisite solos. The two sets were almost identical. In the second set, “I Love You” was switched for “Stigmata Addiction” which turned into a terrific highlight of the set. “The Blackest Rose” from the 2017 “Wall of Sound” album was another highlight in the show but the peaks for me were “Elixir” (from the 2006 album “Loudspeaker”) and “Gimme a Dose” (from the 2003 album “Music for Speeding”). The bulk of the two shows focused on Marty’s vast solo work. But we did get a couple of tips of the hat to his old days as a band member in the form of Megadeth’s “Tornado of Souls” and Cacophony’s “The Ninja”. What a Saturday! Marty and his band delivered – twice – and they left me wanting more. It’s always splendid ear candy experiencing Marty Friedman live in concert. What a performer!