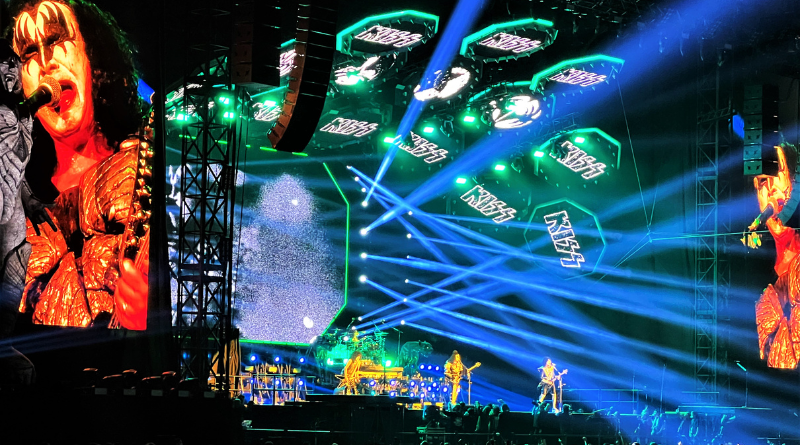 KISS served up a fabulous rock’n’roll party as a thank you and goodbye to the Japanese fans.

Three years ago, just before the Covid pandemic broke out, KISS did a five-show tour of Japan as part of their multi-year End of the Road World Tour. Those Japan gigs were billed as the band’s final Japan gigs. But when the pandemic hit, the band had to take a break from touring for a bit and extend the tour beyond the intended final July 2021 show. As the band successfully restarted the tour, a special encore performance in Tokyo was announced. Technically, the band broke its earlier promise, but I guess no one who attended this “final-final-really” show minded that one bit. A chance to see our favourite rock band once more? Hell yeah. As expected, the show was full of pyrotechnics, lasers, moving platforms, zip lines, fake blood, fire breathing, confetti, balloons and much more in an over-the-top production. This was a fabulous rock’n’roll party for the ears and the eyes and, most importantly, the heart. This being a thank-you-and-farewell show to its loyal Japanese fans, the focus was fully on KISS and its most-loved songs. Unlike the last two KISS tours of Japan, when Japanese artists Momoiro Clover Z and Yoshiki respectively guested the band’s encores, this time there were no special guests. This was KISS’ final Japan show and no one was going to steal their thunder this evening. This was all about the band’s co-founders Paul Stanley (vocals and guitar) and Gene Simmons (vocals and bass) together with their bandmates Eric Singer (drums and vocals) and Tommy Thayer (lead guitar) saying thank you for Japan’s loyal support throughout the band’s long career. The show opened with a trio of the band’s best songs from the 1970s – “Detroit Rock City”, “Shout It Out Loud” and “Deuce”. The strong opening was followed by a trio of songs from the 1980s – “War Machine”, “Heaven’s on Fire” and “I Love It Loud” (as well as 1983’s “Lick It Up” later on in the set). Some people may not know or remember it, but KISS had a strong 80s with several terrific albums. The setlist was, as one would expect for a final show, mainly focused on the band’s most-loved songs. We got 70s classics such as “Cold Gin”, “Calling Dr. Love”, “God of Thunder” (with a flying and blood-drooling Gene Simmons), “Love Gun” (with Paul taking a zip line trip above the heads of the audience) and “I Was Made for Lovin’ You” (with Paul making the return trip from the audience back to the stage). An obvious highlight of the show was “Black Diamond” with Eric Singer singing lead. From the band’s later recording period, there was “Psycho Circus” (1998) and “Say Yeah” (2009). There were no major surprises in the setlist, but we did get somewhat of a deep cut in the form of “Makin’ Love” from the 1976 album “Rock and Roll Over”. Tommy Thayer and Eric Singer both got to shine throughout the show. They are reliable complements to Gene and Paul and this evening they also got to show us their skills with their own excellent solo appearances. The show’s encore consisted of two classics from the album “Destroyer” from 1976, ’“Beth” (a solo performance by Eric on vocals and piano) and “Do You Love Me”. The final song of the final Japan show was, of course, the anthem “Rock and Roll All Nite”. And with that, it was all over. The band has been performing music for 49 years now. By the time they hang up their platform boots, they will have passed the 50th-anniversary mark. Thank you for the music and the rock’n’roll parties. There is no other band quite like KISS. KISS will live on in some form or another, but the big tours will come to an end.