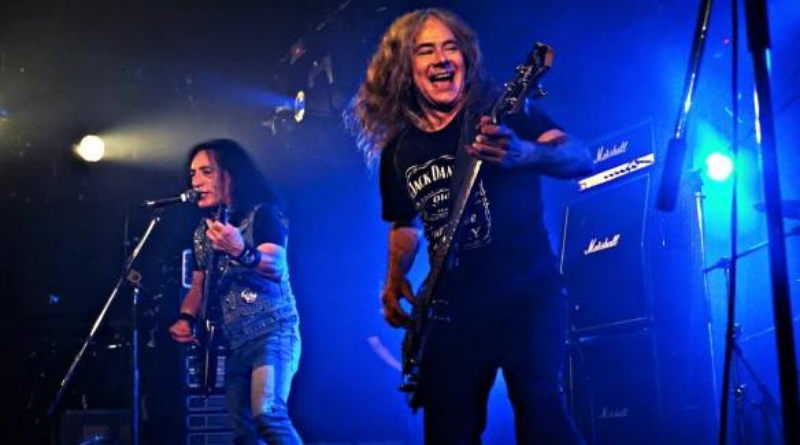 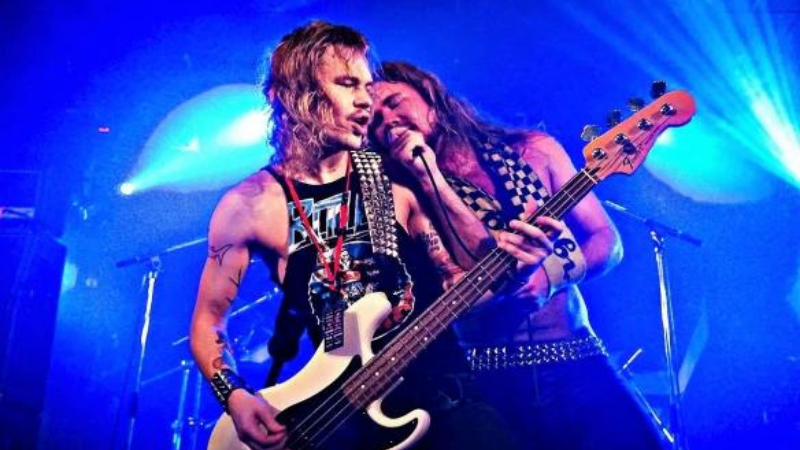 The first international band of the night is the Swedish classical heavy metal quintet of Ambush. Playing an old-school heavy metal mixed with a hard rock feeling and a hair metal look, the guys from Växjö came to warm up the stage and crowd for a night full of rock and roll. With only two albums released, the set list was short but the band put on a cheerful gig from the start with the band members already dancing and jumping around as they walked on stage. Songs like “Close My Eyes” and “Ambush” come shaped with interesting riffs by Adam Hagelin and Olof Engqvist, and great bass lines by Ludwig Sjöholm.

The captivating element is definitely the vocals of Oscar Jacobsson, who combines penetrating screams and soft lines when it is needed. If he had been in a band in the 70s or 80s, he would have probably been considered one of the best heavy metal singers of all time. Unfortunately they did not have much time, but it was not a real issue for a band with a rhythm like theirs. The quintet celebrated their first visit to Japan with lots of beer and the excitement took over the venue. When the good “Natural Born Killers” started, people went crazy, singing along, showing how familiar they are with this song and thrilling the band, even making them stop playing for a while just to hear the fans. Closing the show with “Don’t Shoot (Let ‘Em Burn)”, the Swedish heavy metal band left with such gratitude and pleasure that it was impossible for the fans to not keep asking for more even after the curtain had come down.

Five or six minutes later than planned, the curtain opened showing four guys all dressed in red trousers and black shirts. It was time for the Greek quartet of Chronosphere to teach a thrash lesson to the Kichijoji audience. Having started in 2012, the band has already released three albums. The set list covered all three releases, plus one cover song. Starting the set with the amazing “Before It’s Gone”, from their latest album “Red ‘N’ Roll”, the quartet set the stage on fire with their power and energy, all the way banging their heads while executing impressive riffs.

Guitarists Spyros Lafias and Stam Syrakos are perfectly synced with each other, combining technique and aggressiveness, while bassist Kostas Spades reminded me of Jason Newsted in his Metallica years. Not only for the haircut, but also for the way he performed: always turning his big neck around while his pick touch the chords of his aesthetically shabby instrument. Strolling through the past and the present, when “Picking Up My Pieces” started, the already crazy crowd went crazier with the killer riffs and the beats of Thanos Krommidas, opening a huge circle pit and one or two fans even went crowd surfing over the audience. “Brutal Decay” and the fast “War Infection” were the prelude for the last song, which was a great surprise: a cover of Metallica’s “Battery”. With skill and brutality, they gave their best, pleasing the fans not only with a brutal sound, but also an energetic and enthusiastic performance. By the end, Kostas left his bass to surf over the heads of his fans in front of the stage. Chronosphere certainly has the potential for soon being discovered by a major label which may take their music to even more metalheads worldwide. And if I was already a Greece lover for its contribution to the modern society, now I love this country even more because one of my favourite bands come from there. 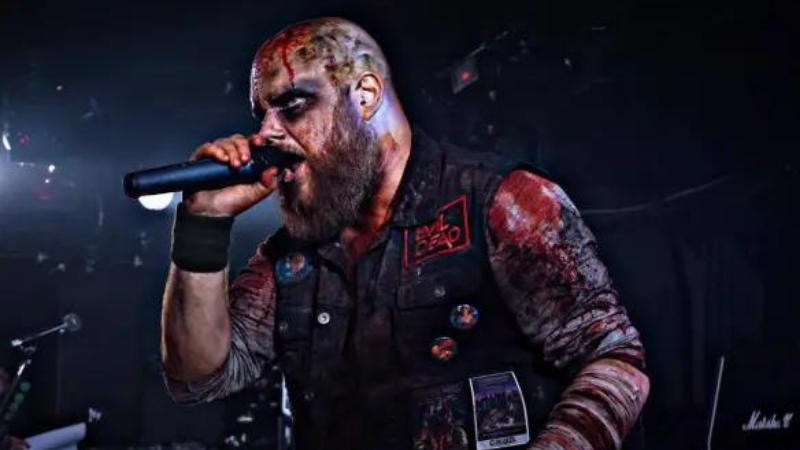 One of the most awaited attractions of the night was probably the Swedish thrashers of F.K.Ü. (short for Freddy Krueger’s Ünderwear). Being on the road for the last twenty years with an extreme sound, many people consider them one of the best thrash metal bands of the present. When the intro began, people already started pushing each other to honour the title of “moshoholics” that the band has given to its fans.

Opening the night with “Rise of the Mosh Mongers”, what Tokyo saw was four people bathed in blood and mud destroying riffs, while marching on the stage guided by the amazing screams of Larry Lethal. As their lyrics make references to horror films, their performances never stray far from that theme. Guitarist Pete Stooaalh’s performance was a spectacle filled with riffs and solos and electrifying interaction with the fans along with bassist Pat Splat. Drummer Unspeakable Emp used all of his strength to give the Japanese fans what they really deserved. One of the most interesting and agitated songs is “Hate Your Guts (But Love Your Brain)”, which has a great chorus, this evening sung by the whole of the Club Seata audience.

They also played some songs from their new album “1981”, showing the fans that even after all these years, they have not lost the recipe for how to create a true thrash metal song. Intensity, heat and bloody are the words that best describe this performance! 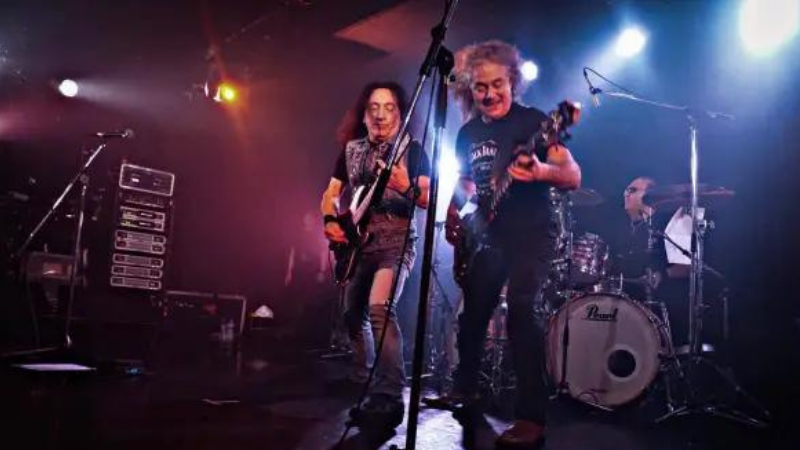 It was around 8pm when the mighty headliners The Rods entered the stage to shake Tokyo for the very first time ever. Unfortunately, the venue was not that crowded at this point in time, but that didn’t stop them from doing one of the best rock shows I have seen in years. People might think that because of their age, The Rods cannot be that great live anymore. But the trio, consisting of David “Rock” Feinstein, Garry Bordonaro and Carl Canedy, really give a rock and roll lecture when their on stage!

Opening the gig with “I Just Wanna Rock”, David’s energy spreads all around the venue, while Garry performs some kind of very old school rock and roll dance. They remind me of bands like AC/DC and Deep Purple, not only by the influence these bands have on their sound, but also on their stage performance. One of the greatest moments was when they played “I Live For Rock And Roll”. It shows the spirit of three young boys that only want to play some riffs and be recognised for it. It seems like their dream came true. Between songs, David thanked and greeted the fans in a very kind way, and so did Carl and Garry. First times are always the most special ones and it was clear how happy these guys were to finally be in Japan. Some people find it boring when a drum solo starts in a show, but I particularly love moments like these, especially when it comes to Carl Canedy, whose solo combined speed, power, feeling and, of course, more rock and roll. One of the highlights of the night was definitely David joking around with the staff beside the stage as well as with the photographers in the pit, and, of course, with the fans. With an impressive set of 23 songs, it was impossible to not get into the spirit. The rock music of the 80s is not gone. Words are not enough to start describing the vibe of the night, but I guess that after this amazing start, we will see The Rods more often in Japan.

Text and photo by Caroline Misokane. 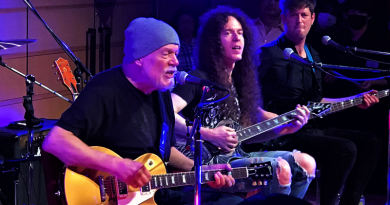