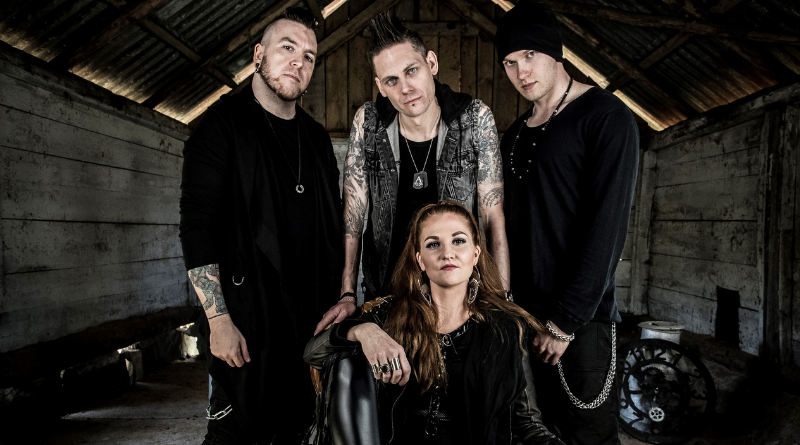 Swedish band We Are The Catalyst gives us modern and catchy metal with pop melodies on its third album.

Formed in 2012, Swedish band We Are The Catalyst has already had some initial success with tours in the UK and China and well-received record releases. An EP release in 2013 was followed by the band’s debut full-length studio album, “Monuments”, in 2014 and a second album, “Elevation”, in 2016. Band members Cat Fey (vocals), Kenny Boufadene (guitar and vocals), Joni Kaartinen (bass) and Håkan Strind (drums) have previously played together in the band One Without. Now they’re back with the rather catchy “Ephemeral”, their third album featuring twelve shiny new tracks. We get very modern-sounding melodic metal combining plenty of keyboards with guitar riffs and heavy drums. It’s the sort of contemporary blend of metal and pop that narrow-minded listeners often brush off as “not metal and so I can’t listen to it”. For those of us who are a bit more curious and open-minded, we can discover some good new music on “Ephemeral”.

We Are The Catalyst is the kind of band that has a chance of making it big as they can potentially appeal to a much larger mainstream audience than more “pure” metal acts. The band lives in that contemporary Swedish musical world that houses diverse acts such as Smash Into Pieces, Amaranthe, CyHra, In Flames, Ghost and much more. It is a world where fitting into a specific genre is secondary to creating modern melodic music. As much as I love my old-school metal stuff that fits within certain limits, it is refreshing to hear some of these newer acts focus on creating music and not worrying about being “true” or anxious about fitting in. The focus here is on writing great melodic songs that are then performed in an appealing fashion of back and forth between pop and in-your-face metal riffing. Some of the songs are built up in a similar way to the classic hard rock power ballads of the 1980s where a song continuously builds up to reach a crescendo and then is brought down to start over again. It works very well. The voice of Cat Fey is a great fit for this music – or perhaps the music was written to fit in with her vocals. Either way, the combination works well.

The album opens with what sounds like a bit of a Lacuna Coil-flavoured catchy pop/metal song called “Over Pale Waters”. It’s a potential radio hit. It sets the tone for the album which continues in a similar fashion throughout. “Innan Allt Faller”, one of the album’s best songs, is sung in the band’s native Swedish, whereas the album’s other songs all have English lyrics. “Alone Against The World” is another track that will work well in the band’s live show. The album closes with what is my favourite track, the dreamy “Dust”. This is a promising band that we all should keep an eye on. They have another UK tour this month and, hopefully, they will keep touring as that is the way that this band will go to the next level.

We Are The Catalyst’s album “Ephemeral” will be released on 13th February.