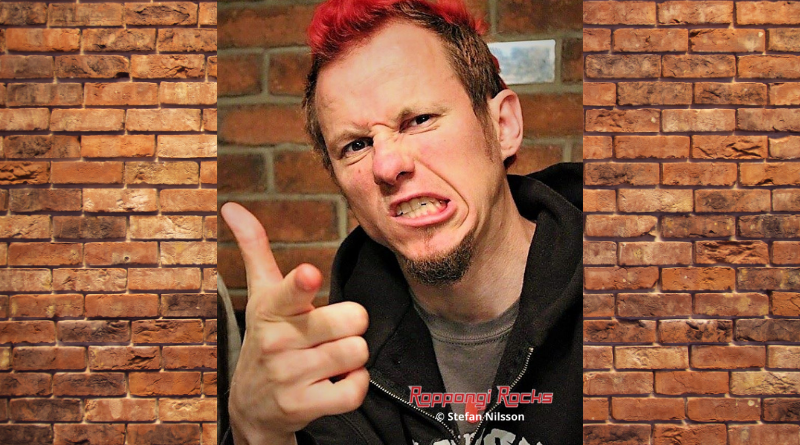 Swedish vocalist, songwriter and producer Jake E co-founded modern melodic metal band Amaranthe in 2009 and was one of the band’s lead vocalists. After four albums and several world tours, he left Amaranthe in 2016 to start a new band, Cyhra. He has also been the lead singer for Dreamland and Dream Evil and a guest vocalist and backing vocalist for acts such as Kamelot, HammerFall, Dragonland, Ember Falls and many more. Roppongi Rocks’ Stefan Nilsson checked in with Jake to learn about the five albums that changed his life.

“Who knew that when this album dropped, my life was gonna change forever? I am gonna try to make a very long story short. I had just started to sing in my first band and everyone around us laughed at us for playing some kind of power metal. And out of nowhere this album was released and took the world by storm! All of a sudden, power metal was on everyone’s lips, and people at the rehearsal place started to give us compliments all of a sudden. But was this really what changed my life you’d ask? No, of course not. It happens to be that the singer Joacim Cans and I were related and at that point in time, I told myself ‘If he can do it! I can do this too’. It wasn’t really that easy. Joacim Cans became my mentor. He took me under his wings and he tutored me about the music industry. But the most important thing is: he believed in me! He produced my first demo. He got my first record deal with Dreamland and he played a major role in Amaranthe becoming as big as it got! If ‘Glory to the Brave’ had never been released, I would not have been asked to write these lines today! I am eternally grateful for everything Joacim has done for me, but also the rest of the band. I have had the honour to sing backup vocals on half of HammerFall’s albums and I’ve toured with the band as their pyrotechnician. So, to round this off. This is without a doubt the album that has formed me to become the musician I am today!”

“I have to include two albums here, as I feel that these two albums are connected with such an indestructible bond! The ‘Keeper’ albums are the reason why I am sitting here making this list in the first place. I grew up with a big family around me and my uncles that were only ten years older and thus became more like big brothers to me. They were record collectors and they had every single album you could dream of! I think I must have been four or five years old when they got the ‘Keeper’ albums and I’ve been told that I was hooked immediately! The reason I bring this up is that my uncles are responsible for letting me listen to all the albums that I list here. The ‘Keeper’ albums were what got me hooked on metal, but they were also the albums that I still listen to, to this day. When I started singing, it was these two albums that I listened to when I practised. They are the only CDs that I had to buy new copies of because I played them too many times.”

“When this album came, I was completely floored! James Michael’s vocals were from another dimension. It was like something I’ve never heard before. I had just finished reading Nikki’s book with the same name and the way James had transformed the whole book into songs was a masterpiece out of this world. Amaranthe was just in its startup phase, but this was the album that got me hooked on writing lyrics that should make the listeners feel the meaning behind every word. I don’t say that I have mastered that ability yet, but ‘The Heroin Diaries’ is the reason why I feel lyrics are such an important part of music and songwriting in general.”

“When I first heard this song, the album’s title track, I was blown away, literally. Damn! What a singer! I couldn’t believe how someone could sing like that! This album was in my rehearsal room day and night and I sang and tried to copy Roy’s emotions and it was hard as fucking hell! But all the practice paid off because I must say that the way I sing today, I got a lot to thank for all the hours I’ve spent trying to mimic Roy’s singing style. I have never tried to copy his way of singing, But the way he manages to put emotions in every word has helped me a lot in my own progression as a singer. The icing on the cake was ten years later when the band asked me to join them on tour singing backup vocals. It is still, to this day, one of the most amazing things I’ve done so far in my career.”

“My wife listened to this album all the time when it came out. I was not hooked immediately. For me, it was strange and very far away from the music I usually listen to. It wasn’t until 2015 I started to get it. It grew on me and, all of a sudden, I felt how the music made sense, how genius everything was and how clever Oliver Sykes has to be to come up with such ingenious lyrics. I had just started to write Cyhra’s ‘Letters to Myself’ and this album was gonna be my soundtrack while writing the Cyhra album. If you read my lyrics, you can see that Oliver’s way of writing lyrics has made a great impact on me. And not only that, Oliver was the one that really had me trusting myself into starting writing around a more personal perspective. I would refer to this album as the first album in my ‘grown-up phase’ as a songwriter.”