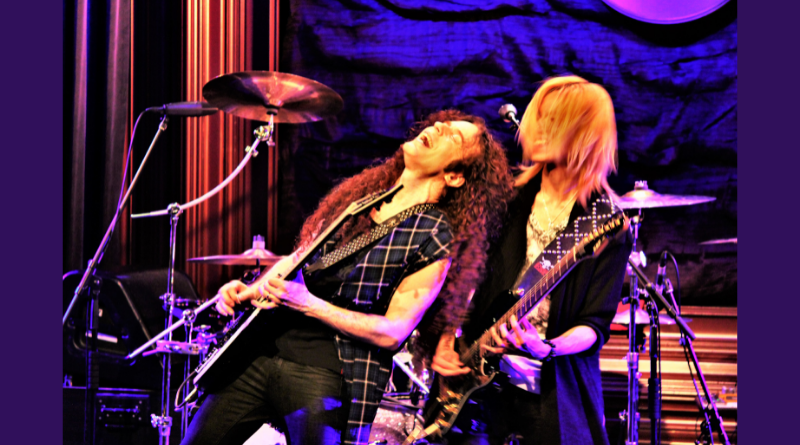 A triumphant return to the Tokyo stage for guitar maestro Marty Friedman.

Oh, how we have missed our gigs! Marty Friedman’s Tokyo performance on Friday night was my first proper rock gig in about 14 months. 14 very long months. How great it felt to once again be in a music venue and be entertained. All the better that it was Marty Friedman that did the performing. He is an innovative and genre-bending musical genius that has never disappointed me with any of his live performances, no matter what he plays. It is always a joy to watch him perform. While his latest album, “Tokyo Jukebox 3”, is an album dominated by interpretations of J-pop songs, Marty has not forgotten his metal roots. He has most recently contributed a terrific guitar solo to the Black Sabbath tribute project Sabbatonero and he’s also done a solo on the debut single by the Singapore-based extreme metal band Adarrak. On Friday evening at Cotton Club in Tokyo, Marty rocked out with a terrific combination of many different genres, including metal and J-pop. It was Marty being Marty. He won’t restrict himself musically. With the global pandemic that has stopped most shows in the last year still going on, this gig was done in a Covid-compliant way. The audience was seated with adequate spacing between tables. All the staff and audience members had their temperatures checked as they arrived at the venue and masks were mandatory. The audience was asked to not shout between songs, only clap. This being Japan, everyone complied and it turned into a terrific evening. Music fans are craving live music. This kind of compromise is a great way to actually be able to do gigs until the pandemic gets under control. The artists, venues, support staff and fans need live gigs in these challenging times.

Marty Friedman is usually backed by a world-class band and this evening was no different in that respect. But, unlike many of Marty’s Japanese shows in recent years where he’s had bigger bands including keyboards and sometimes cello and violin, this was a scaled-down band consisting of Toshiki Oomomo on bass, Naoki Morioka on guitar and the one and only Chargeeeeee on drums. It worked well where the focus was squarely on Marty’s guitar without other things getting in the way. It felt raw and gave the music an excellent less polished nerve. It’s a relatively short show of about 70 minutes (this was the second of two shows on the same night with slightly different setlists) and it was entirely instrumental. Style-wise it was all over the place. We got it all. And it was bloody good. Marty was visibly very happy to be able to perform in front of a supportive hometown audience once again. I recognised many faces in the audience. These were mainly super fans who are frequent attendees at Marty’s Japanese shows. With “Tokyo Jukebox 3” about to get its international release, Marty kicked off the show with three songs from it: “Kaze Ga Fuiteru” (an Ikimonogakari cover), “Makenaide” (a Zard cover) and “Gurenge” (a LiSA hit song that was the theme song for the anime series “Demon Slayer: Kimetsu no Yaiba”). Then he moved on to revisit two of the best songs from his 2017 “Wall of Sound” album, “Whiteworm” and “Self Pollution”. Later in the set, we also got to hear the splendid song “For a Friend” from the same album. This evening we, of course, got the terrific “Dragon Mistress” from his first solo album “Dragon’s Kiss” from 1988 and the wonderful “Undertow” from the “Inferno” album. There was a trio of songs from the first “Tokyo Jukebox” album”: “Yuki No Hana” (a Mika Nakashima cover), “Amagigoe” (a Sayuri Ishikawa cover) and “Kaeritaku Natta Yo” (another Ikimonogakari cover) to finish the set. Before that we got treated to a “Thunder March/Morioka Ocha/Barbie” medley.

After the show, Marty greeted fans and took pictures with them, although it was all done in a Covid-compliant way with face masks, no handshakes, pre-signed autographs and a transparent plastic sheet between Marty and the fans when taking pictures. A bit awkward but a great way for Marty to be able to interact with his fans. Better this than nothing for his loyal fans.

Marty not only gave us a smashing Friday evening. He also showed us that, with a few compromises, rock gigs can be done and you can interact with the fans. There is hope.